More proof that socialism does not work 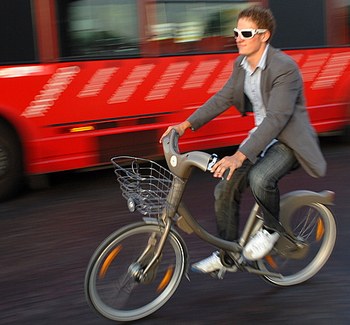 And that the NY Times and the WaPo were too stupid to see this coming.  The Socialist mayor of Paris, Bertrand Delano, was going to save the planet with his brilliant scheme to have 10,000 bicycles all over Paris for anyone to rent any time.  The plan was to cut down on automobile usage, congestion, encourage exercise, etc. yada yada yada.

Before the plan was rolled out, the WaPo wrote glowingly about how wonderful the project was going to be:

….”On July 15, the day after Bastille Day, Parisians will wake up to discover thousands of low-cost rental bikes at hundreds of high-tech bicycle stations scattered throughout the city, an ambitious program to cut traffic, reduce pollution, improve parking and enhance the city’s image as a greener, quieter, more relaxed place.”

“By the end of the year, organizers and city officials say, there should be 20,600 bikes at 1,450 stations — or about one station every 250 yards across the entire city. Based on experience elsewhere — particularly in Lyon, France’s third-largest city, which launched a similar system two years ago — regular users of the bikes will ride them almost for free.”

A  year after the introduction of the plan the NY Times wrote a glowing article about how wonderful the little socialist plan was succeeding. But already the wheels were beginning to fall off (pun intended):

[After glowing reports of how successful the little socialist scheme was doing:] ….”Still, there have been significant problems with traffic congestion and safety, vandalism and theft. At least 3,000 of the bikes have been stolen — nearly 15 percent of the total, and twice original estimates. Some have been seen in Romania or found in shipping containers on their way to Morocco.” [ Whoops. Who could have seen that coming? Bikes all over the city with nobody looking after them getting stolen? I’m shocked, SHOCKED I tell you!]

And now the truth has become apparent to even the socialist cheerleaders at the Times online.  From a 2/10/09 article:

“It was introduced to roaring success — hailed by environmentalists and cycling enthusiasts as the ideal solution to congestion on the streets. But life is now proving brutish and short for the Vélib, the self-service bicycle that the city of Paris introduced 18 months ago.”

“So far, 7,800 of the “damage-resistant” grey bicyclettes — which can be hired for up to €1 (87 pence) per half-hour — have simply vanished, while 11,600 have been vandalised, their operating company said yesterday.”

“Hung from trees, thrown in the river or shipped to foreign parts, the Vélib bikes have met much more aggressive treatment than expected when the first of the 20,000 of them were docked at their 1,250 stations in July 2007. The damage has forced JCDecaux, the advertising company that supplies them to the city, to replace most of the original bicycles at a cost of more than €400 each. ”

“We underestimated the degree of damage that they would suffer,” said Albert Asseraf, the marketing director of JCDecaux. The scale of the Paris scheme had consequences that his firm had not encountered with its operation in Lyons, the second-biggest in the world but with still only one fifth of the Paris bikes, he said. Many were being stolen because tourists and first-time users were not docking them carefully when they returned them to their computerised stations, Mr Asseraf said. Some have turned up in Eastern Europe and Africa, according to the media….”

What’s next? The little socialists are gonna try to tell us that people treat public restrooms and porta-potties the same as they do the bathrooms in their own houses? That the DMV and the post office are run as efficiently as privately owned corporations? That people treat public property as well as they do their own privately owned property? Makes perfect sense to, well an idiot who hasn’t been around and who believes all that socialist bullshit that they teach in universities…

So, have the little commies in Paris learnt their lesson? Hell no! From the Times online article:

“Last week the city council approved the outline of Mr Delanoë’s latest self-service transport scheme: Autolibs — 2,000 clean-energy cars that will be stationed at bays around the city from autumn next year.”

But hey, with liberals/progressives/socialists, it’s the thought that counts. They meant well, therefore, it is a huge success.

15 responses to “More proof that socialism does not work”