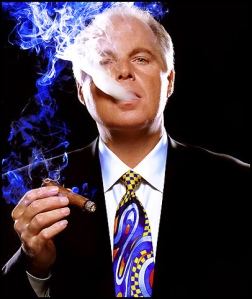 OMG!  Here is the link [as he says to self, quit acting like a school girl. Act like you belong!]

This is almost as great as the thrill that would hit me if I called in and actually got to speak to him myself!  My hits are going through the roof!  My site meter is on viagra.

Only one complaint. Notice that my article about the bogus quote was written last spring?  I even e-mailed a copy of it to Rush Limbaugh back then.  I knew that allowing that crap to remain out there would eventually bite him in the butt.  You cannot allow lies to tarnish your reputation without fighting them vigorously, wherever and whenever you find them.  But I am honored that Rush cited to my humble blog.