Disclaimer for Constitution and Declaration of Independence…WTF???

Wilder Publications & A&D Publishing inserted the following disclaimer: “This book is a product of its time and does not reflect the same values as it would if it were written today…” Parents might wish to discuss with their children how views on race, gender, sexuality, ethnicity, and interpersonal relations have changed since this book was written before allowing them to read this classic work.”

Hey, I got an idea…how about a disclaimer for the Koran. It could read; This book is a product of it’s time and parents should be sure to tell their children what a fucked up, destructive pedophiliac the person was who wrote it, and to beware of  following it’s teachings as it’s a straight path to Hell. But it’s a classic work.

Neither defense will be able to stop the other.  Chicago’s new offense will sputter for the first 2-3 weeks of the year before becoming highly potent later in the year.  Lions sack Cutler 5x and he throws 2 picks.  Bears move the ball on Lions D that opts for “bend don’t break;”  couple of stops will win this game.   Stafford looks like an all pro quarterback and those who only watched him last year are amazed at his progress. Lions offensive line seems as though they are channeling some other team that has a great O-line. Jahvid Best makes Lions fans begin the long process of forgetting Barry.   Megatron catches a T.D.  Lions break one of longest losing road streaks evuh.  Take the Lions and the points on the road.  Vegas bookies better not think this win is a fluke…

p.s. Here is a website where you can watch your favorite game for free (I think–It has not come on yet, but all other broadcasts are free).  You’re welcome.

Obama lectures us on Islam (he should know)

The Fresh Prince of Bill Ayers used his bully pulpit to lecture Americans to know our places.   Again from the NY Daily News The Won is quoted:

“This is a time of difficulty for our country,” Obama said. “And it is often in such moments that some try to stoke bitterness – to divide us based on our differences, to blind us to what we have in common.”

So I got to thinking, hmmmm, just what do “we have in common” with Muslims?  I mean aside from the obvious fact that they are supposedly humans who require food, water and air to breath.  Do we have beheading in common with them? Do we approve of pedophilia? Do we force our women to wear veils?  (Maybe forcing ugly women to wear veils…stay focused, John.)  Do we advocate taking over countries, forcing their occupants to convert to Christianity and force an autocratic Christian-based system of governing on them? Granted, doing so would be good for them, but we don’t! Do we advocate beheading Muslims where ever they are found just because some others burned a Bible or the American flag? Let’s not forget “honor killings” and cliterectomies, and death to all who dare to become apostate! What am I missing?

Help me Oh Barack America!  This finding what we have “in common” with Muslim scum is harder than I imagined.  In fact, reading back on the short list that I’ve assembled, I’m quite proud of our differences.  Where’s Sheldon when we need him?

Note the breathless prose of those brave “reporters” from the New York Daily News as they boldly condemn the Muslim fanatics who burn our flag and vow to kill Americans for burning the Koran.  No, wait, sorry.  Here’s what they wrote instead:

“A hate-filled fanatic ripped pages out of a Koran and lit them aflame Saturday amid the chaos outside the planned community center and mosque near Ground Zero.”

“‘If they can burn American flags, I can burn the Koran,” the unidentified zealot shouted. “[Americans] should never be afraid to give their opinion.'”

[Here the hit piece went on to pick out selected quotes from the crowd who agreed with the reporters views.]

UPDATE: HERE ARE SOME OF THE HATE-FILLED ZEALOTS! From Atlas Shrugs

Ummm, this passes for “reporting?”  Even I don’t stoop to such extreme lows and try to pass off pure speculation with actual reporting:   “A hate-filled fanatic”?  How do the reporters know what motivated him? Could be Patriotism.  Or love of the First Amendment’s guarantee of Freedom of Speech? Maybe he is just an attention seeker.  Maybe he’s attempting Death By Cop Koran Burning.  It does not logically follow that one who burns a Koran is “hate filled.”  Actually, it is a very hateful and disgusting and vile book that motivates hateful and vile people to do very hateful and vile things.  Like cutting off heads from living persons. Like buggering little boys. Like stoning and caning women for minor “offenses.” 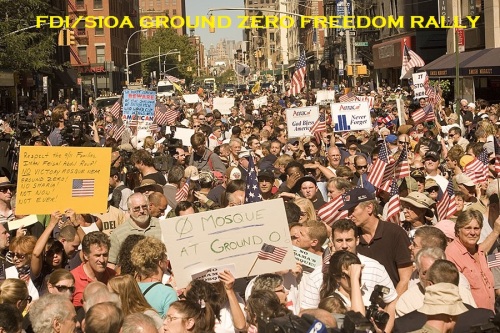 But our brave, intrepid reporters from the NY Daily News don’t called Muslims hateful zealots! Oh, no! That might earn them some enmity from true zealots who might actually take offense and attempt to cause them great bodily harm.

So as long as we are speculating on the motives of actors based purely upon their actions, without any actual insight into what the person believes or what motivated them, how about we just label the co-authors of the article fucking cowards?  Too afraid of offending some goat-herder immigrant from Bumfuckistan to say anything negative about the Koran, which is one of the worst influences in the world.  Imagine the millions who would never have been killed violently had that evil book never been written…