This is a good read and it is so true. It’s a well directed slam at our public school system and some of the policies of our government over the years.

If you or I did this we would go to jail

Feds FINALLY do something right!

The Coast Guard bans “crude sucking barges.”  About time.  And they did not waste much time doing it, either.  TheDaleyGator links to the GatewayPundit which is all over the story.   “The Coast Guard came and shut them down,” Jindal said.

END_OF_DOCUMENT_TOKEN_TO_BE_REPLACED

Sarah Palin has balls–Reason 1,837 why liberals hate her

Asked about marijuana, Palin said: “If we’re talking about pot, I’m not for the legalization of pot. I think that would just encourage our young people to think that it was OK to go ahead and use it…However I think we need to prioritize our law enforcement efforts. If somebody’s gonna to smoke a joint into their house and not do anybody any harm, then perhaps there are other things our cops should be looking at to engage in and try to clean up some of the other problems we have in society…and not concentrate on such a, relatively speaking, minimal problem we have in the country.”

Okay, well she did not go far enough.  She did not support the outright legalization of pot.  I have made my position clear.  I don’t smoke it (anymore) and I would never suggest that anybody start now.  But we are freakin adults.  We should make the rules issues that there is no real controversy.  Who the fuck are the politicians to say that we can’t smoke harmless pot?

Back to Palin.  There is no upside for her to voice support decriminalization.  Her natural constituency is probably going bonkers that she is “soft” on “the war on drugs.”  But you notice you never see national politicians come out in support of de-criminalization.  Barry Soetoro almost did, but then he apparently got cold feet.   You know that there must be many out there who privately favor doing so.  And you know that many of them actually partake of the evil weed.  They just don’t have the balls to say it.

or a stupid Jewish “conservative” blogger?  The photo screams a 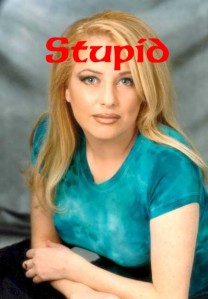 little of both.  Not sure what she charges, but I’d say by the looks of her she has to pay for it.   What fool would pay for that??  Linked DIRECTLY to the bitch’s website.  Surely this will get that ugly bitch’s attention.

Little Miss Cease and Desist is a coward.  She only attacks lay persons.  Let’s see her tangle with a lawyer.

UPDATE:  Some good people turn the other cheek when they are attacked.   I applaud them.  But some people don’t.  😉