I FINALLY realized who Elena Kagan reminds me of…

Remember that old running gag on Saturday Night Live where they had that asexual looking person and the people discoursing with him/her kept trying to find out which sex he/she was?  “Is Bobby spelled Bobby or Bobbie?”  I couldn’t find any of them on youtube, perhaps because they are so old, but she reminds me of that asexual person. Put her in a suit, shorten her hair a bit, and she could be a dead ringer for that Bobby/Bobbie.  Okay, it has been a long time since I saw them, but in my imagination that’s who she reminds me of…

And I ain’t the only one questioning her.   I can’t remember any Supreme Court nominee of whom it was felt that his/her ex-roomate had to be called upon to confirm the nominee’s sexual preferences.

“Elena Kagan is not a lesbian, one of her best friends told POLITICO Tuesday night, responding to persistent rumors and innuendo about the Supreme Court nominee’s personal life.”

“I’ve known her for most of her adult life and I know she’s straight,” said Sarah Walzer, Kagan’s roommate in law school and a close friend since then. “She dated men when we were in law school, we talked about men — who in our class was cute, who she would like to date, all of those things. She definitely dated when she was in D.C. after law school, when she was in Chicago – and she just didn’t find the right person.”

John No. 9, aka Eliot Spitzer, also chimes in:

Another friend, former New York Governor Eliot Spitzer, a member of Kagan’s social circle at Princeton University, wanted to make the same point as Walzer. “I did not go out with her, but other guys did,” he said in an email Tuesday night. “I don’t think it is my place to say more.”

Personally, I love it when the left is jumping through hoops defending this butch-looking lefty’s sexual habits.  So until I hear of a dude who actually admits to boning her, I’m still questioning her sexual habits.  I’m betting either he will have been too drunk to remember, or too ashamed to admit it.  Either way, it will keep the libs chasing their tails and keep them out of mischief on more important issues.

Note to LTB:  You should have assumed the worst about me, ‘cuz it’s usually true!  😉

Gender testing for Olympians but not for Supreme Court Justices?

This poor young lady was forced to undergo the humiliation of having her gender questioned by the IOC, and all she was doing was running a race that would never affect us in a million years.  Shouldn’t Elena be tested so that we can know whether in fact she will be the third woman on our Supreme Court.  Her decisions can and will affect our daily lives.  Besides, I can’t live in suspense for the next 30-40 years not knowing the truth!

How to treat pirates, Russian-style

International law does not allow us to prosecute them, you say? Oh, no problem.  We’ll just take them back out to sea and release them back into their boat.   And put a bullet into each of their heads.   How terrible of you, John, you ask?  When U.S. troops shot pirates most of the country cheered.  Obama showed his chops and earned praise for imaginary leadership.  I don’t know if this will be a deterrent to other pirates, but I can guarantee you that these pirates corpses will not be pirating any time soon.  Three cheers for Russia.

A pirate spokesman, who wished to remain anonymous, contacted Somalilandpress today said at least ten of his men were executed by the Russian navy after the troopers stormed MV Moscow University.

“The Russians commandos stormed the ship before sunrise, starting a firefight with our men, onboard they injured three of them and one was killed,” he said.

He dismissed the Russian navy statement that the men were released because of “the absence of a legal base to carry out prosecution procedures against pirates”.

“The Russians never released the young men instead they shot them point-blank range then loaded their lifeless bodies back on the boat,” he added.

He smashed a bottle over a would be robber’s head, foiling the robbery of a convenience store and possibly saving the clerk’s life.

Course many will say that if he had stayed out of it he would not have been shot 4x.  But the robber was clearly trigger happy.  He had already shot at the clerk’s feet twice, and the patron probably didn’t know that the robber was just trying to scare her.

From BBCNews:  “There have been five violent school attacks in the past two months in China, leaving dozens dead or injured.”

Also, don’t forget that American citizen who was murdered with a knife during the Olympics.  What is going on in the People’s Nirvana of China?  I’m sensing some serious discord among the peasants.  Could it be that they long for freedom?  Are they pissed that the elite are billionaires while the workers get the shaft? Or is this some government experiment with secret mind-altering drugs gone awry?

Whatever the reason, this is strange as hell.    And tragic.  I mean if you have a problem, kill the leaders of the communist party, not little kids.

And you know what the liberal solution would be:  Knife control.  Right Gramps?

Reason No. 391,007 to hate liberals.  The Supreme Court recently ruled that an old cross that was erected in the middle of the desert to commemorate WWI vets did not violate the Establishment Clause of the Bill of Rights.  Boo frickin hoo, the ACLU lost another one.  So what did the liberals do?  They immediately stole the cross in a fit of “if we can’t beat them legally, we will beat them illegally.”  The VFW owned it.

And the MSM is silent.  Imagine the wailing and gnashing of teeth by them if the tables were turned.  Say a monument to atheism was torn down and stolen after a conservative law suit to remove it had been lost?  I hope they find whoever did it and some vet takes a rusty old bayonet to them.

Lars is the Swede who drew some picture of Mohammed as a dog.

Here is a video showing how sub-human muslims are when they start thrashing around trying to protest him.  Supposedly Lars bought a dog for protection.  He named him Muhammed.  For that, Lars earns the coveted Man of the Week Award from Smash Mouth Politics. You go Lars! 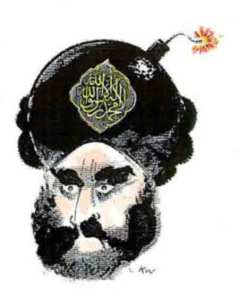 Screw all y’all Muslim pigs who can’t take a joke.

Mothers’ Day–Is it just me?

The following could have been written about me.  What the guy told his wife is almost verbatim what I said to my wife in the past.  I said to my wife that she is not my mother, that mothers’ day is between her and our two adult children now.  I am not sure how well that went down, judging by how that same attitude affected this other woman.  From MomLogic:

“Last Mother’s Day, momlogic spoke with a woman who said that Mother’s Day ended her marriage. “I knew Mother’s Day was off to a bad start when my husband informed me the night before that the holiday had nothing to do with him and it should be between me and the kids. In the morning, I was handed a cold cup of coffee by my husband. My card and gift were left downstairs. The card and gift had been bought hours earlier, after my husband asked me, “So, what do you want, anyway?” No thought, no advance planning, no special effort put forth at all. It was so disappointing. I chose to sleep on the couch that night. My husband chose to move out. Mother’s Day essentially marked the end of our marriage.”

Now obviously that woman’s marriage could have been on the rocks and this was just the final straw.  But apparently she is not alone in her attitude.  The day after Mothers’ Day is one of the biggest days of the year for married women to sign up for a website that specializes in arranging married persons to have an affair (I won’t say which website–hopefully you do not want to know, and if you do, I won’t be helping you out).  Over thirty thousand women nationwide signed up the very next day after Moms’ Day.  The next biggest days for sign up by women is following New Year’s Day and Valentine’s Day (Okay, I get that last one).

My question is, how do you other gents out there treat your wife on Mothers’ Day?  I used to encourage my children to treat her special, but I have even stopped that (it did not work with my son, and my daughter probably didn’t need the encouragement).  And Mom, if you still read here, why don’t women just say what they want if they want their hubby to treat them special on Mothers’ Day?