Some things just are too perfect to put into words…

This is one of them.

END_OF_DOCUMENT_TOKEN_TO_BE_REPLACED 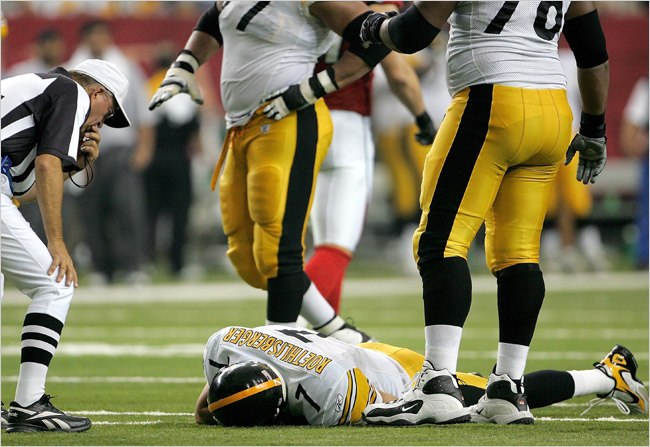 Poor, poor Big Ben.  He might be brain-damaged because of all the concussions that he took because he holds the ball too long waiting for his receivers to get open.  Or he might just be a mega-millionaire who thinks he can treat women like dirt because, well, he’s a rich jock.   One of the money quotes from a Sports Illustrated article, after the article spent valuable minutes trying to persuade readers that he is the victim of brain damage:

“Granted, Roethlisberger’s conduct might also sound a lot like a description of a man in his 20s with a $102 million contract who is a deity in the town where he lives and plays. Michelle Rouda, 24, used to work in the VIP section at the Pittsburgh bar Margarita Mamas and remembers years ago the first time she saw Roethlisberger: “He ordered a bottle of Patron,” she recalls, “and I looked up at him and he was chugging it standing on a table and there were all these girls reaching up to him and he was dumping tequila on people.” It doesn’t take a cubist’s imagination to see how something short of brain damage might alter the rules of social engagement just a tad for someone in Roethlisberger’s position.”

I’m going to go out on a limb here and officially declare that Big Ben is a lout who is rich and thinks that he can do and say anything to women that he wants and nobody will say or do a damn thing about it.   That’s just me though. What do you think?

Matthew McCabe, a Special Operations Petty Officer Second Class (SO-2), was facing three charges: dereliction of performance of duty for willfully failing to safeguard a detainee, making a false official statement, and assault.

This is a Whiskey Tango Foxtrot if there ever was one! I would probably tell these folks that erecting an Islamic Mosque within a stone’s throw from the site of the worst attack on American soil by Islamic extremists isn’t a very good idea. I don’t know who dreamed this brain fart up, butt they need to have their head examined.

A proposal to build a mosque steps from Ground Zero received the support of a downtown committee despite some loved ones of 9/11 victims finding it offensive.

The 13-story mosque and Islamic cultural center was unanimously endorsed by the 12-member Community Board 1’s financial district committee.

The $100 million project, called the Cordoba House, is proposed for the old Burlington Coat Factory building at Park Place and Broadway, just two blocks from the World Trade Center site.

“I think it will be a wonderful asset to the community,” said committee Chairman Ro Sheffe.

Imam Feisel Abdul Rauf, who helped found the Cordoba Initiative following the 9/11 attacks, said the project is intended to foster better relations between the West and Muslims.

He said the glass-and-steel building would include a 500-seat performing arts venue, a swimming pool and a basketball court. “There’s nothing like it,” said Rauf, adding that facilities will be open to all New Yorkers.

Daisy Khan, executive director of the Cordoba Initiative, said donations from prestigious groups such as the Ford Foundation and the Rockefeller Brothers Fund would pay for the construction.

“Whatever concerns anybody has, we have to make sure to educate them that we are an asset to the community,” Khan said.

Inside Edition “One ups” the FBI

Inside Edition raced up to the home of the Times Square Bomber’s house in Connecticut to see what kind of story they could drum up,( make up). Imagine the chagrin of the local FBI office when they receive a call from the producers of Inside Edition telling them they missed some evidence. I.E. found a passport, some income tax forms, as well as the bomber’s time cards from a previous job and his college transcripts. Evidently, the bomber wasn’t too good in English, receiving a D as well as a C in math. None of his grades were anything to write home to momma about.

This is one of the most ignorant things I’ve ever heard of in my life.  It’s as if the vice principal involved in this incident believes the school is in Baja California, not Northern California.

Administrators at a California high school sent five students home on Wednesday after they refused to remove their American Flag T-shirts and bandannas — garments the school officials deemed “incendiary” on Cinco de Mayo.

So let’s remove the flag of the actual country we reside in to exhibit sensitivity to a country we not only do not live in, but a country that 75% or more percent of the student have never lived in – or perhaps even visited?

These children were – rightfully – seeking to balance love of their country with a celebration of – a foreign land?

The name of the assistant principal involved?  Miguel Rodriguez!  Check!   Hell, maybe he’s a member of the Terry Oatts Fan Club – Left Coast chapter?  But of course, this doesn’t in any way smack of racism or Socialism, does it – Mr. and Ms. MSM?  (snark)

At minimum, Mr. Rodriguez’s decision was wrong-minded and sends a powerful anti-American Patriotism (and back-handed racial message) to the student body and parents of the school district.  The action displays utter ignorance and insensitivity while punishing Patriotism.

Miguel Rodriguez was dead-ass wrong in making this call, and I believe owes (at minimum)apologies to the children, their parents and the community.  IMHO, he needs some sensitivity training to balance out that inner anti-U.S. sentiment he appears to harbor.

But Patriotism may not be desirable in Morgan Hill after all.  A quick look at the junior Senator representing Northern California? Why, none other than…  Barbara Boxer.  Makes perfect sense…

Ed. note:  Does this look incendiary to you?  It’s OLD NAVY for chrissakes!

The five teens were sitting at a table outside Live Oak High School in Morgan Hill, Calif., on Wednesday morning when Assistant Principal Miguel Rodriguez asked two of them to remove their American flag bandannas, the Morgan Hill Times reported. The boys told the newspaper they complied, but were asked to accompany Rodriguez to the principal’s office.

The five students — Daniel Galli, Austin Carvalho, Matt Dariano, Dominic Maciel and Clayton Howard — were then told they must turn their T-shirts inside-out or be sent home, though it would not be considered a suspension. Rodriguez told the students he did not want any fights to break out between Mexican-American students celebrating their heritage and those wearing American flags.

So the lesson of the day appears to be:  Show love for your heritage,  we love it!  As long as it’s not the U.S.A.

“They said we were starting a fight,” Dariano told the newspaper. “We were fuel to the fire.”

The boys told Rodriguez and Principal Nick Boden that turning their shirts inside-out was disrespectful, so their parents decided to take them home, the newspaper reports.

“I just couldn’t believe it,” Julie Fagerstrom, Maciel’s mother, told the newspaper. “I’m an open-minded parent, but it’s got to be on both sides. It can’t be five kids singled out.”

Sad days people – sad days indeed.  These so-called educators are bringing Socialistic rhetoric right to our kids, whether we like it or not.  How distorted and turned around are things when the American flag has to be hidden – in America?

h/t Fox News for the quotes….