I’d check out the Democrats around there.  Sounds like a perfect way to set up Tea Partiers:  “Oh, look, a Tea Party activist posted the address on line.  Let’s go snip the gas line, and make it look like arson, and they’ll get blamed for it!”

And even if it was a real opponent of Perriello’s who was actually inspired by the so-called Tea Party activist, am I all upset about it? Nope.  I want U.S. Representatives to have the fear of God put into them.  You work for us you sons of bitches.  You bastards want to start ramming down our throats legislation that is not supported by the majority, then expect to have your lives made miserable.  Karma is a bitch.

Oh, and if some punk ass liberal thinks this personal opinion of mine is somehow “inciting” some one else to violence, come get some.  You bastards thought it was funny when that camel jockey threw a shoe at GWB, and when a movie was made about President Bush’s fictional assassination.

“It is not out of the Rahm of possibility here that this is a staged incident.”
“Leninist Steny Hoyer (D-MD) assembled the lapdog media today with a phony concern that Democrats may be the target of violence.  An all too convenient allegation from the brother of a Congressman whose address was posted suspiciously raises many red flags.”
“This alleged incident may be as phony as the alleged “n” word that black Democrat members of Congress alleged to have heard but was never picked up by various video and audio sources on site.
With the backdoor deals, coercions and threats made to people like Tom Periello by the Chicago Mob, he may be in too deep at this point to back away from these people.” 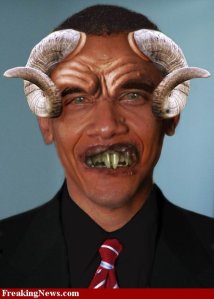 He's not the antiChrist. He's the Devil himself.

Seeee! Republicans aren’t so dumb.   They figured out what this squirrelly POS is all about while most Democrats are too stupid to understand that he is Satan incarnate.

Do I really believe that he is the antiChrist? Nah.  He’s an insignificant little stuffed suit who is in over his head. He was perfectly qualified to be a little neighborhood rabble rouser, but now he is the perfect example of an affirmative action plan gone awry.  But if Harris or anybody else asked me those idiotic questions, I’d give them the same idiotic answers that they were looking for.  I suspect many Dems would have said the same thing out of spite during GWB’s hey day.

Per “Profootballtalk” : Some guy supposedly said “Shut the f**# up!” and others supposedly laughed.   That may or not be true, and is not even particularly interesting to me. What is interesting is the comment section after the article.  All the hostile heathens and atheists came out like flies to bovine excrement.  Some examples:

“Haha. Sanctimonious zealot.”  “Throw his ass to the lions.” “hahahahahahahaha, awesome. he couldn’t just pray to himself? self-righteous prick. (yes, it is possible for someone who gives all the credit to god to still be self-righteous).”

“Thump the bible at home Tebow. Most people don’t want to hear that shit!! .. including this guy.”

“Said one of the other players in response: “Shut the f–k up.” Others players in the room then laughed.”  “hahahahahaha, awesome.”

“f’ing A dude, you’re hurting your cause by being such a freaking pharisee type. Makes you wonder why so many people won’t be sad when his get butt handed to him on a crucifix.”

Someone find that unnamed player and give him a medal.

“He should pray for a professional throwing motion. It won’t help, but as long as he wants to be a delusional nitwit he might as well go “full-Christian”.”

“Hey Tim, God doesn’t give a sh!t about you scoring high on the wonderlic, or your football career, so shut the fk up man!”

“…any adult who babbles on in public about their imaginary friend in the sky should expect to have such nonsense ridiculed and laughed at…i guess “shut the f*ck up” would also get the point across!”

“Religion is a festering boil on the ass of progress.”

“As much as I want to believe this story, it reeks of false rumor. Would he really request a prayer service in such a scenario. I think Tebow’s a douche, but he’s not that stupid.”

UPDATE: Oh, geesh. Godless heathen flushed out, and Tim Tebow didn’t even say what they say he said…