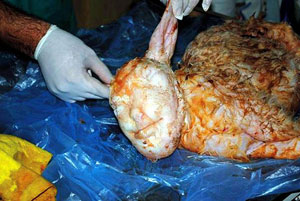 Here at Smash Mouth we are acutely attuned to news reports of goats born with human faces (see here).  We know we have many rural readers, and we know what you rural readers do. (Just kiddin’, I’m a country boy who just happens to live in the ‘burbs until I can convince the city wife to move back to the country–it’s complicated.)

But any way, here is the news report that goes with the photo above. I’m believing in it until they tell me it’s fake.

“Erhan Elibol, a vet, performed Cesarean section on the animal to take the calf out, but was horrified to see that the features of the calf’s snout bore a striking resemblance to a human face.”

“I’ve seen mutations with cows and sheep before. I’ve seen a one-eyed calf, a two-headed calf, a five-legged calf. But when I saw this youngster I could not believe my eyes. His mother could not deliver him so I had to help the animal,” the 29-year-old veterinary said.

2 responses to “Goat born with a human face (redux)”