Doug Mataconis, you are our WINNER! sEND me $3,000 IMmEDiaTELY!

Dumbass Doug Mataconis of “Below the Beltway“, one of the crappiest legal minds in world history, swallows hook, line and sinker whatever they say on Democrat Underground or HuffingtonPost.  He even cites “Wikipedia” as his authority.  That would be like standing up in court and saying, “Your Honor, I know that Obama was born in the U.S.A. because it was in “Peanuts” cartoons just the other day.

As a REAL lawyer, with a keenly trained legal mind (somewhat dulled by years of alcohol ingestion), the first thing I do is to keep an open mind. Hmmm. The document looks legit. It looks old, it looks like it has a lot of little details that some schmuck of the street couldn’t have just made it up. Is it possible it is fake? ABSOLUTELY. Do I accept it without further proof? Or dismiss it out of hand? Hell no. I’m waiting. It has the book and page number. It should be easy for somebody to go look it up and track down its authenticity. Likewise, it should be easy to track down more info, and either prove or disprove the document. END_OF_DOCUMENT_TOKEN_TO_BE_REPLACED

Famous events that I will always remember

I remember the day JFK was assasinated. I remember where I was (I was in line to be dismissed from kindergarten class to get on the bus. I thought the teacher said the President had been “shocked.”)

The first Super Bowl (I didn’t even watch it, I sat at the kitchen table and listened to it on the T.V. in the other room).

When they first landed a man on the moon (I was away on a camping trip with my family in “the U.P.”  My uncle was one of the first to not believe it really happened. “Uncle Lou” believed it was a hollywood fantasy. Back then it never occurred to me not to believe it.  Now it does. It’s even fashionable…) 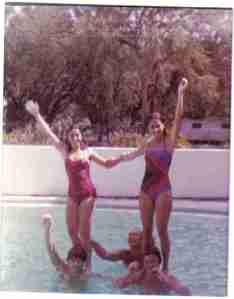 Me, bottom right, a year before or after John Lennon's murder

When John Lennon was murdered (don’t axe me why I remember, as I was no fan, but I was at college down in southern Florida).

When the space shuttle exploded soon after take off (I was between law school classes at Wake Forest and saw it on the T.V. in the student lounge area). END_OF_DOCUMENT_TOKEN_TO_BE_REPLACED