“Moralistic Hypocrisy” of the G.O.P.? My, my, aren’t we using big words for such a small I.Q.?  Let me give you a little history lesson, you obvious moron: 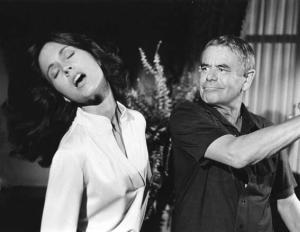 I bitch slap. Because I can.

Democrat politicians for years have been able to do anything that they want, no matter how immoral, and get away with it, and even prosper doing it.  FDR had a known mistress. JFK had a different woman nearly every day.  LBJ got b.j.s from a future historian who was his aid at the time. Teddy freakin Kennedy left a woman whom he had intended to go bang to die in a car.  Barney Frank had a male prostitute service run out of his basement. Nothing was ever made of any of this. Even Elliott Spitzer committed crimes and the only thing that happened to him was that he resigned as Governor.

Bill Clinton, too, got a little randy, but he was elected and nothing would have ever become of it, until he got sued, and perjured himself.  But for a little semen stain and the resultant DNA, he too would have gotten away with it, aided and abetted my immoral pigs like you.  Republicans tried to impeach him, for committing a crime, not for having sex.

Now, when some Republicans pols do the very same things that Democraps have been doing for eons, and Republicans no longer try to hold them to a higher standard, you accuse them of “moralistic hypocrisy”? You bumbling idiot. They just are playing now by the game rules set by the Democrats. You idiotic Democrats made the rules. No standards are too low. Nothing is beyond the pale if it involves sex. Morality? That’s old-fashioned, claim the Democraps. Well, Republicans have finally taken off the gloves and started playing by those same rules. And you whine about it?

Now, I’m not condoning the Republican pols, but I’m not about to throw every fallible Republican politician under the bus for their immorality when the Democrats would never think of doing it to their politicians. Fine, vote the Pub pols out at the next election, and replace them with a better REPUBLICANS. But force them to quit, when we need every Republican voice we can find? Only asshats would do that. This is war. Democrats are trying to ruin our country. And dipshit idiots such as yourself are doing everything in their power to help them.

p.s. Did I mention how pathetic you and your feeble blog are?