The President looked into his eyes “and got a sense of his soul.” 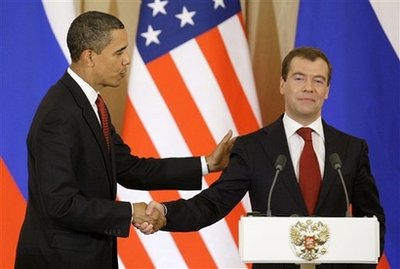 A warm greeting from the President of Russia. President Medvedev later was heard to murmur: "That dude scares me."

The President worried that this foreign dictator was pulling his own country into socialism, and was even headed towards a communist dictatorship. “We’ve tried communism, and it does not work.  Communist dictatorships don’t work.  Hell, I am President, and I can’t even get out from under the shadow of Prime Minister Putin,” President Dmitry Medvedev said.  “But the President of the United States of America is who really scares me.  Least with Putin you know what you get. Ex-KGB, committed hard-line communist, he doesn’t hide who he is.  But Obama comes on like a “moderate” Democrat and then uses invented “crisis” after “crisis” to seize more and more control.”
The White House had no comment when asked about these quotes.