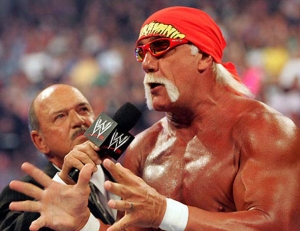 works so well, why don’t we allow it in jails? And why do we only do it to Muslims, he asks in his gruffest whiney voice. And the liberal girly-men are having multiple orgasms over him–a real manly man–siding with them on the issue of torture. (It’s so rare for any manly man to agree with liberals that they can’t help themselves.)  Can’t you just hear the ecstacy in his writing as one liberal oohs and aaahs over Jesse’s recent comments? From a recent article from The Daily Beast by an apparent full-fledged girly-man:

“Watching Ventura cut through the cable chatter like a rusty bayonet [ooooooh!] has been thrilling [aaaaah!]. ‘You give me a waterboard, Dick Cheney, and one hour, and I’ll have him confess to the Sharon Tate murders [ooooooh!],’ Ventura told Larry King last week, adding an exclamation point to his contention that torture produced unreliable intelligence [aaaaaah!].”“On Monday, he faced off with Hasselbeck, The View‘s house conservative, and took the debate over waterboarding’s effectiveness to its logical extremes: “If waterboarding’s OK, why don’t we let our police do it to suspects so we can learn what they know [ooooooooh]?” he asked. “We only seem to waterboard Muslims. [ooooooooh!]… Have we waterboarded anyone else?” [aaaaaaaahhhh!] Later that night, it was a cage match with Fox’s Hannity. Ventura declared he’d rather have “a thousand Monicas” [oooooh ooooooh OOOOOOOOH Don’t stop! DON’T STOP!] than the terrorist attacks that occurred on Bush’s watch. [YESSSSSSSSSSSSSSSSS!]  Videos of these appearances generated hundreds of thousands of views on YouTube. [OH GOD YESSSSSS!]”

Time for me to bitch slap Jesse a/k/a Hulk Hogan back to reality. With logic, something in which Hulk is obviously whoafully deficient.  First, dumbass, yes, waterboarding can produce unreliable intelligence. But these people were not waterboarded in order to get a false confession to convict them.  They were waterboarded in order to get intelligence to save lives. The intelligence provided was checked out. And some of it at least produced real leads that supposedly saved lives. That’s reality, chump. So the fact that some of the intelligence produced was unreliable is just as bogus as your idiotic looking tights and fu manchu that you used to wear while wrestling.

Second, moron, we don’t let cops waterboard criminal suspects because of our Constitution. No American can be compelled to incriminate himself.  The fact that we do not allow it was a choice that our Founding Fathers made.  The reason was not because it was unreliable. People can confess and be very reliable, even without waterboarding. Courts are not allowed to use true confessions that were voluntarily given if the police merely failed to give the suspects their “Miranda Rights” before the confession was given. (There are exceptions which I am not going into at this time.)  The reason such confessions are not allowed not because the confessions are unreliable, you hulking ignoramous.  But we are not dealing with American citizens, dumb bitch. We are dealing with enemy combatants. In a war that we did not start. In order to save lives. To the extent that the Constitution applies to them, it is the part that the President of the United States is the Commander in Chief with the authority to wage war, not the Fourth Amendment. Enemy combatants don’t deserve our Constitutional Rights.

And finally, you pathetic fuck, the reason why “only Muslims” have been waterboarded is because “only Muslims” started and prosecuted a war of terror against us. Three fucking ragheads were waterboarded. THREE. And lives were saved. And dumb hulks and liberal girly-men are apoplectic. Thank you George Bush. Thank you Dick Cheney. And bitch-SLAP to you Jesse Ventura.

One response to “Jesse Ventura on waterboarding: Smash Mouth Politics bitch slaps him”