Colin Powell defines what it is to be a Republican 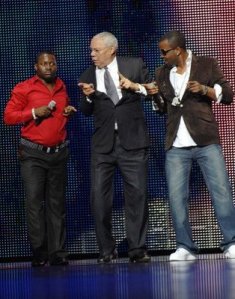 Belief in certain principals? Nah. Conviction on a certain core set of issues that are non-negotiable? No way, Jose’. How does Mr. Powell “prove” he is a Republican? He spoke at two Republican Conventions! He worked for “ten years of his life” in Republican Administrations! Wooo hoooo! That settles it in my mind. He can vote Democrat. He can publicly endorse a Democrat for President. It’s all good. He worked for Republican Presidents! He gave a speech!

And, I’m not finished. He also gave as his reasoning for supporting Obama that Obama was “best qualified” for the job.  Bwaa haa aahaaahaaa haaa. A community organizer, a less than first term Senator, a state legislator from the corrupt city of Chicago, was “best qualified.”  [Translation: either this is a case of Bros sticking together, or Powell has serious mental issues. Obama is like a turtle on his back in dealing with the problems of the country and the world.]

So, not only is Colin Powell a traitor to his party, he is too fucking stupid to be a Republican. Run, don’t walk, to the Democrat party! And don’t let the door hit you on the black ass as you leave.