No, Virginia, health care is not a “Right” of every citizen

Not if what is meant by it being a “right” is that the Government owes every citizen free health care–and almost universally that is exactly what is meant when someone calls healthcare a right.  Words have meaning. And when liberals change the meaning of words the intent is almost always because the liberals then want to use the new meaning to try to win a policy debate.  Liberals want to institute national healthcare and this is just one of their many-pronged attacks aimed at convincing America to do so.

All men are created equal, and are endowed by their Creator with certain unalienable Rights, and among these are Life, Liberty and the pursuit of Happiness. Our rights do not come from Government. Our Rights come from God. Our Government does not “owe” us anything. Our Government derives its power from the consent of We, The People.  So if the Government provides us with universal healthcare, it is not because healthcare is a Right.  Rather, it is a voluntary obligation that is assumed by the Government, by authority of the  consent of a majority of the Citizens.

Want to force other people to pay for your healthcare because you are too lazy or too poor to pay for it? Fine. Unfortunately, in America, if you can convince enough people to do so you can pass laws that “tax” other people (tax being a glorified word that used to mean “Steal”) and take the money and use it to buy insurance for others who do not pay for it. But don’t call it a Right because you are too lazy to think straight, or too gutless to call a theft by force what it is–theft.  Sure, some of the main proponents of “universal healthcare” mean well. Most do-gooders do. But unfortunately, liberal do-gooders almost always want to do-good with other peoples’ money.

You have the right to seek healthcare. You can pay for it. You can try to get it for free. You can even seek to get the Government to force others to pay for it for you. But please, don’t try to claim that it is a Right owed to you by the Government, or a God-given Right. The Government does not pay for anything. The Government takes money from others involuntarily, by force, in order to give to those who did not pay for it.  And the biggest reason that the Government does that to retain its power.  Give away others’ money to constituents, get re-elected.  It’s the American way.  So please, do not call “universal healthcare” a Right. Whether you support our current system or advocate a European-style of healthcare, it is not a Right. It is a voluntary obligation that is assumed by the Government, by authority of the  consent of a majority of the Citizens.

And the 9/11 Truthers.  It is no more implausible to believe Bubba 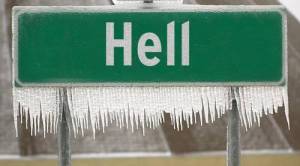 Never mind, I was lying. I will NEVER agree with you. On anything.

Clinton’s Administration was responsible for a cover-up or complicity of the Oklahoma City bombing than it is to blame the Bush Administration for complicity in the 9/11 bombings and/or that Bush had an evil conspiracy to invade Iraq based upon lies and deceit. And let’s face it, the kos kids and HuffPo readers, and, well, just about every rabid AIDS breathing lefty (sorry for the redundancy) out there believes those lies about the Bush Admin.  So to idiots such as the blogger (and I use that term loosely) at Blue Virginia, I say FUCK OFF you little gnob kobbler. I’ll join you in condemning Catherine Crabill when hell freezes over.   At least she bases her opinion on the findings of a man with expert credentials who has found it very implausible if not impossible that Timothy McVeigh was the only actor on the date in question.