Obama wants the U.S. to pay $100 billion to the International Monetary Fund

The world economy is deteriorating and the currencies of poor countries could collapse, The Annointed One says. And Timothy Geithner is playing his little Stepin Fetchit  to convince us that we ought to go along with this hare-brained idea.  Oh, sure! The $100 billion is just a loan. What could go wrong loaning other countries billions of dollars? But even worse, instead of lending the money directly to them, we are letting some intranational group over which we have little control get the money and lend it out for us. Guess who used to be the United States’ “Governor” to the IMF? Why, little Timmy Geithner himself. 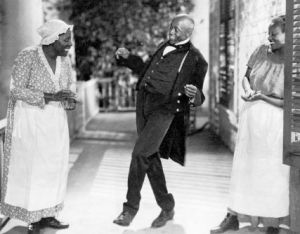 “The International Monetary Fund (IMF) is an organization of 185 countries, working to foster global monetary cooperation, secure financial stability, facilitate international trade, promote high employment and sustainable economic growth, and reduce poverty around the world.”  But guess what, “the IMF is also one of the largest official holders of gold in the world.”

Timmy “Turbo-Tax” Geithner has been in the news lately trying to convince we ignorant tax-paying sheeples that lending $100 billion of our tax money to the IMF is a good thing.  Basically, he argues, we need the world to recover economically to help ourselves. So let’s lend the world money, like we lent money to American banks and corporations.  (Yeah, that has worked out so well.) And besides, he says,  “We bear a substantial share of the responsibility for what has happened, but factors that made the crisis so acute and so difficult to contain lie in a broader set of global forces that built up in the years before the start of our current troubles.”  Oh, yeah, Timmy? Who is this “we” bullshit? I did not cause anything. Neither did the vast majority of Americans. How about we find out who are the real “we” s who caused this mess and make them pay proportionately for their share of this financial mess? Instead, we let them keep their penthouses and their summer homes in The Hamptons while we bail out not just the U.S. but the entire world economy with taxpayer guaranteed money. And we do not even get final say on who gets our money!  Thanks but no thanks.

Ha ha ha! For a little conspiracy theory reading in your spare time, go here or google “Diversified Metal Products v. IRS et al”–I’m not saying I buy into any of it, but it’s out there for insane freaks such as Okieflavor4U.