Snooping on incoming calls from known terrorists into America–TO PROTECT US FROM TERRORIST ATTACKS–a terrible violation of our rights!

Using the power of the state to track down an insolent plumber with the Audacity of Hope to dare ask the Mess I, uh, uh uh a question? Good job folks. Noboby talks to the Mess I uh, uh, uh that way! [And NO, dumbasses, it wasn’t George Bush who spied on him, it was lying thieving Democrats who did.]

As Michelle Malkin write: “If that doesn’t send a chill up your spine, you don’t have a spine.”

My MOTHER voted for Obama!

I’m crushed. She had been apolitical all her life, studiously avoiding political discussions as unfruitful and fraught with the danger of causing arguments. I thought her vote was safe. When she told me today she mailed in her vote for Obama I about cut off all communications with her. When I got over being flabbergasted, I asked her why: “I can’t stand McCain, he’s such a creep. And then he picked Palin, the dumbest woman I’ve ever seen.” When I sounded incredulous that she would vote for Obama, she said “He’s not THAT black!” I kid you not.

Couple of thoughts: 1) I guarantee you she got this crap from involuntarily watching the mainstream media for probably a total of 1/2 hour of news in the past 6 months. She has no idea of the issues, or of Palin’s intelligence. 2) I guarantee you millions of idiots make their Presidential choice in the exact same way. Just listen half-assedly for about 30 minutes to what the liberals blabber on about on TV, and then we entrust to them a vote for the “leader of the free world.” IS IT TOO LATE TO TAKE AWAY THE RIGHT OF WOMEN TO VOTE? OR TO REINSTITUTE A POLE TAX? OR AT LEAST A FREAKING QUIZ ABOUT THE ISSUES BEFORE IDIOTS ARE ALLOWED TO VOTE? No wonder Democracy doesn’t work as well as dictatorships. Dumb people are allowed to vote!

Obama is a liar, lying to the American people in order to get elected.

And all the liberals know this. This is hide the salami on a nationwide scale. All the left-wing crazies know he is just saying whatever it takes to get elected. “I’m moderate! [wink wink] I’m reasonable! [wink wink!] I will be bi-partisan! [yeah, if you Republicans want to bow down and do what you are told!] Trust me! [Komrades]”  HOW DO I KNOW? HE ALREADY SPELLED IT OUT FOR THE LEFT WING CRAZIES THREE YEARS AGO! 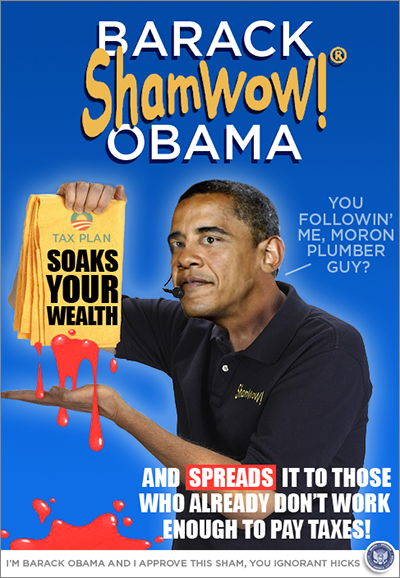 He killed some dogs, for crying out loud! Yes, horrible. But not the same as killing a person. He has been punished, demonized and his life ruined. So stop. Instead, the Commonwealth is trying him for the same charges again. Yeah, nevermind that prohibition in the Constitution about not being charged twice for the same crime. Oops, the Constitution says what the Supreme Court says it means, and those idiots long ago interpeted it to mean a state and the Feds could both charge for the same offense. But I digress.  FREE MIKE VICK! Mary Winkler killed her husband and fled with her children, and she did less time than Vick already has done.

“Mary Winkler was convicted of voluntary manslaughter in the 2006 death of her husband Matthew, a Church of Christ minister, and is on probation for the killing she blamed on domestic abuse.

“Winkler, who spent a total of seven months in jail and a mental institution, has had temporary custody of her daughters — ages 11, 9 and 3 — since August.”…